What are the effects of fluoride on human health?

Fluoride has beneficial effects on teeth at low concentrations, but excessive exposure to fluoride can have a number of adverse effects, such as dental and skeletal fluorosis, the severity of which depends on the level and duration of exposure (Gazzano et al., 2010). Worldwide, an estimated 200 million people are at risk of fluorosis. However, incomplete data make precise quantification of the global health burden of fluorosis impossible (Fewtrell, 2006).

The ingestion of moderate amounts of fluoride, including that from drinking water, can lead to structural strengthening of tooth enamel and a lower rate of dental caries. The greatest decline is seen when drinking-water fluoride concentrations lie between 0.7 and 1.2 mg/L (Oszvath, 2009).This has led to the widespread fluoridation of drinking water in countries such as the USA and to the use of fluoridated toothpaste.

Childhood exposure to fluoride concentrations in drinking water that exceed the WHO guideline limit of 1.5 mg/L can lead to dental fluorosis (Fig. 2.6), a condition characterised by the mottling and pitting of teeth. Dental fluorosis occurs in young children as the tooth enamel is developing (NRC, 2006). Fluoride ingestion after about the age of 8, when adult teeth have been formed (even if they have not yet erupted), will not lead to dental fluorosis. Adults with dental fluorosis must therefore have been exposed to high fluoride concentrations in their early childhood. Symptoms of mild dental fluorosis are the appearance of white striations or patches on the tooth enamel, while yellow and brown staining, pitting and chipping of the tooth enamel are symptoms of more severe fluorosis. Dental mottling is permanent, though some cosmetic treatment (bleaching, abrasion) can remove some of the visible stains. 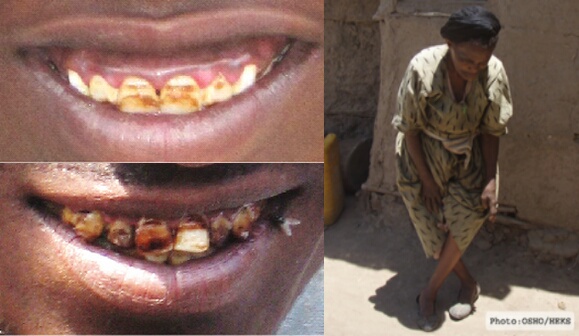 Fig. 2.6 Examples of dental and skeletal fluorosis (Terms of use: Cite original source from Handbook)

Prolonged exposure to high fluoride concentrations over several years increases the risk of developing crippling skeletal fluorosis. This condition is characterised by pain and stiffness in the backbone and joints, accompanied by increased bone density (osteosclerosis). In its later stages, crippling deformities of the spine and joints arise, together with neurological defects, muscle wasting and paralysis (Oszvath, 2009). Studies on occupational and endemic fluorosis have shown that the extent of the symptoms is related to the duration and level of exposure and that skeletal fluorosis is at least partially reversible over a number of years. (e.g. Grandjean, 1982; Krishnamachari, 1986; Susheela and Bhatnagar, 2000). In addition to these more obvious symptoms, there are others grouped under the term “non-skeletal fluorosis”. Non-skeletal fluorosis includes a reported decrease in cognitive capacity (measured by IQ tests), lethargy, an impaired ability to concentrate and possibly even the onset of dementia (USRC, 2006). Whether these effects could be due to enzymatic changes or impaired function of the thyroid gland is unclear. Fluoride may also disturb the endocrine system, acting as an inhibitor of secretions from the parathyroid glands, which regulate extracellular calcium and phosphate concentrations. Possible effects on the gastrointestinal, renal, hepatitic and immune systems have also been reported (USRC, 2006). There has been difficulty in proving observed health effects (in scientific studies) to be the result of elevated fluoride intake, and more rigorous epidemiological studies have been recommended.

The WHO guideline value of 1.5 mg/L might not be suitable for hot, arid areas where people have a higher daily water intake (Brouwer et al., 1988). The recommended maximal daily fluoride intake for children younger than 8 years (to prevent dental and skeletal fluorosis) is 0.1 mg/day per kg of body weight (SCSEDRI, 1997, Table 3.3). For adults, a daily intake of 14 mg leads to an excess risk of adverse skeletal fluorosis, and there is evidence for increased risk of an effect on the skeleton at an intake of 6 mg/day (Fawell et al., 2006). Not only drinking water, but also cooking water and fluoride contained in food products can contribute considerably to a person’s daily fluoride uptake (Malde et al., 2011). Skeletal effects in fluorotic areas may vary in severity depending not only on the daily fluoride uptake, but also on the intake of other essential nutrients important for bone formation, such as calcium, zinc, iron and magnesium. Deficient nutrition will therefore increase the risk of bone deformation when excess fluoride is consumed (Chakma et al., 2000).

Overview of fluoride in soils, plants and foodstuffs

Fluorine is an abundant element in the Earth's crust, and soil concentrations can range from approximately 100 to over 1000 mg/kg. With its high affinity for electrons fluorine exists as the negatively charged ion, fluoride. Geochemical factors control fluoride solubility, and the resulting reduction in availability, coupled with only a passive plant uptake mechanism, limits food concentrations to at most a few mg/kg (Table 3.2). However, plants grown in fluoride-contaminated soils may accumulate considerable amounts of fluoride, although the amount of fluoride accumulated appears to be very dependent on the species. In general, roots accumulate more fluoride than shoots, leaves and fruit, and it is also thought that in some cases, fluoride accumulation is related to the calcium content of the plant. The high fluoride content in Ethiopian cereal products, in particular teff, could possibly be related to the fluoride-rich soils of the Rift Valley (Table 3.2).

In addition to standard food items, such as those listed in Table 3.2, other products such as toothpaste can make a significant contribution to fluoride intake. Trona, a salt used in the Rift Valley of East Africa for cooking, contains significant amounts of fluoride (100 to 17,900 mg/kg, Nielsen and Dahi, 1995), as does the condiment “black salt” (rock salt), used extensively in Indian cuisine (~ 20,000 mg F/kg, single measurement, Eawag). Another potential source of fluoride intake for young children, soil ingestion, can be excluded in most cases (NRC, 2006). 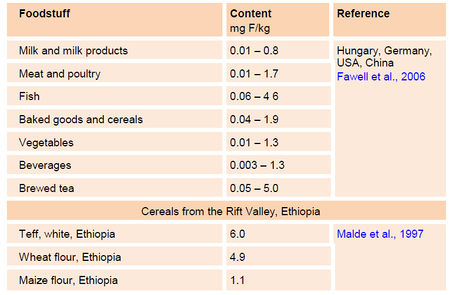 Fluoride has both beneficial and adverse effects on human health. In low concentrations, it is known to contribute to the prevention of dental caries; however, in excess amounts, it is toxic (Gazzano et al., 2010; see Section 2.2 for more details). The range between adequate and excess fluoride intake is quite narrow. Standards for fluoride intake have been established for the USA and other industrialised countries (Table 3.3). They stipulate an adequate intake of 0.05 mg F/kg/day, based on the amount necessary to prevent dental caries. Tolerable upper daily intake levels are around 0.1 mg F/kg/day for infants and 0.1–0.14 mg F/kg/day for adults. 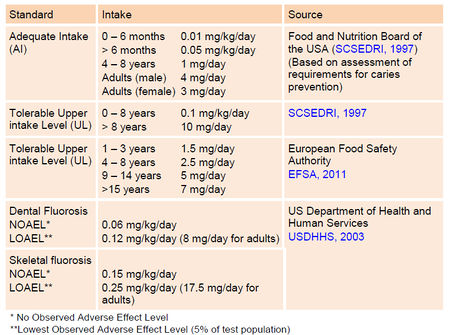 Table 3.3 Standards for fluoride intake (Terms of use: Cite original source from Handbook)

Mitigating exposure to fluoride via food

Fluoride metabolism (absorption into and excretion from the body) is influenced by a number of factors, including respiratory and metabolic disorders, altitude of residence, physical activity, nutritional status, composition of diet and genetic predisposition (Buzala and Whitford, 2011). These factors can lead to an acid-base imbalance in the body. Fluoride absorption in the stomach is pH-dependent. In acidic gastric fluids, fluoride is protonated (< pH 3.4), and the neutral HF species can pass through the lipid bilayer membrane of the stomach a million times more readily than the charged fluoride ion (F-). Some fluoride absorption (independent of pH) also occurs in the small intestine (Buzala and Whitford, 2011). Diet has an important influence on fluoride absorption. For example, a vegetarian diet leads to an increase in urinary pH. Calcium in the diet reduces fluoride absorption in the body by the formation of insoluble fluorite (CaF2). In China, a study in Jiangzi province showed that children that drank milk had a significantly lower dental fluorosis rate than those who did not (Chen et al., 1997). In India, where fluorosis is endemic, dietary change to lower the intake of fluoride and increase the uptake of calcium, iron, vitamins and antioxidants is recommended (Godfrey et al., 2011). Reversal of skeletal disfigurement caused by fluorosis in young children has been achieved by giving them dietary supplements and switching them to low-fluoride drinking water (NEERI, 2007). It should be pointed out, however, that the diagnosis of skeletal fluorosis requires X-ray analysis, and some bone alterations appear to be permanent (Krishnamachari, 1986). Cortical bone thickening and calcification of muscle insertions and ligaments appear to remain unchanged (Grandjean and Thomsen, 1983).

Fluorosis and dietary assessment and mitigation guides have been developed by the Fluorosis Research and Rural Development Foundation (Susheela, 2000) and the National Environmental Engineering Research Institute (NEERI, 2007). It is recommended that the potential for fluorosis mitigation through dietary changes be explored as an integral part of a fluorosis mitigation strategy.

Prediction modeling and mapping of groundwater fluoride contamination throughout India