Arsenic in drinking water is a global threat to health, potentially affecting about 140 million people in at least 70 countries worldwide (Ravenscroft et al., 2009). It is considered by some researchers to have more serious health effects than any other environmental contaminant (Smith and Steinmaus, 2009). Under most geochemical conditions, arsenic in aquifers remains tightly bound to the sediments, and dissolved concentrations in the groundwater remain low. However, elevated concentrations of arsenic in groundwater can be found even when solid-phase concentrations in the sediments are unremarkable. (It is the 55th most abundant element in the Earth's crust with an average content of 1.8 mg/kg). Such sediments are typically young and contain organic carbon that can be consumed by microbes. Microbes use oxygen or other oxidants present and create chemically reducing conditions in which reduced species, such as arsenic (arsenite, As(OH)3), iron (Fe(II)) and manganese (Mn(II)) predominate. Groundwater in low-permeable host rocks/sediments with chemically oxidising conditions, high pH and generally arid conditions may also be contaminated, though to a lesser degree (Smedley and Kinniburgh, 2002). Figure 2.2 shows the modelled global probability of the occurrence of geogenic arsenic contamination in groundwater for both of these conditions combined. Geothermal contributions and sulphide oxidation from sulphide minerals in host rocks can also lead to elevated arsenic concentrations in groundwater, but these conditions tend to be more localised and have not been included in the model. 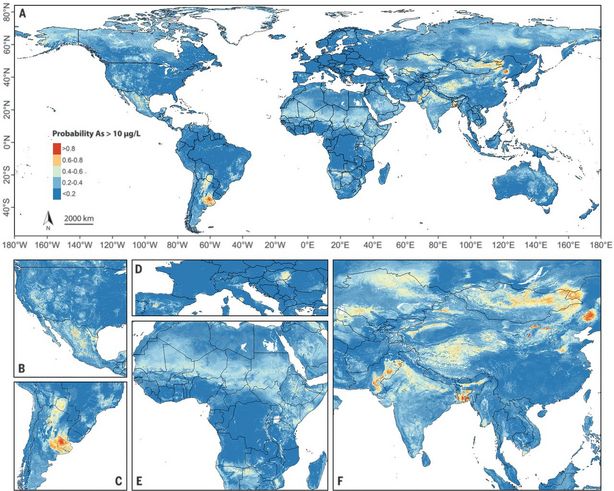 Fig. 2 Global prediction of groundwater arsenic. (A to F) Modeled probability of arsenic concentration in groundwater exceeding 10 μg/liter for the entire globe (A) along with zoomed-in sections of the main more densely populated affected areas (B) to (F). The model is based on the arsenic data points in Fig. 1 and the predictor variables in table S2. Figs. S2 to S8 provide more detailed views of the prediction map (Terms of use: Cite original source from Podgorski, J.; Berg, M. (2020) Global threat of arsenic in groundwater, Science, 368, 845-850 )

Regions and populations at risk

Areas predicted to have high arsenic concentrations in groundwater exist on all continents, with most being located in Central, South, and Southeast Asia; parts of Africa; and North and South America. Known areas of groundwater arsenic contamination are generally well captured by the global arsenic prediction map, for example, parts of the western United States, central Mexico, Argentina, the Pannonian Basin, Inner Mongolia, the Indus Valley, the Ganges-Brahmaputra delta, and the Mekong River and Red River deltas. Areas of increased arsenic hazard where little concentration data exist include parts of Central Asia, particularly Kazakhstan, Mongolia, and Uzbekistan; the Sahel region; and broad areas of the Arctic and sub-Arctic. Of these, the Central Asian hazard areas are better constrained, as evidenced by higher probabilities.

Probability threshold values of 0.57 from the sensitivity-specificity comparison and 0.72 from the positive predictive value (PPV)–negative predictive value (NPV) comparison were found using the full dataset (combined training and test datasets) of arsenic concentrations. The proportions of high modeled arsenic hazard by continent associated with each of these probabilities are shown in Fig. 3. Global maps of the potentially affected population in the risk areas, as determined by these two thresholds, are shown in Fig. 4. As described in the methods, these maps were then used to estimate the population potentially affected by drinking groundwater with arsenic concentrations exceeding 10 μg/liter.

The resulting global arsenic risk assessment indicates that about 94 million to 220 million people around the world (of which 85 to 90% are in South Asia) are potentially exposed to high concentrations of arsenic in groundwater from their domestic water supply (tables S4 and S5). This range is consistent with the previous most comprehensive literature compilations, that is, 140 million people (41) and 225 million people (42). Household groundwater-use statistics were not available for ~6 to 8% of the affected countries (depending on the cutoff), for which the less detailed statistics derived from the AQUASTAT database of the Food and Agriculture Organization of the United Nations were used instead (see methods for details). To determine the amount of error that using these more general groundwater-use statistics might introduce to the overall population figures, the global potentially affected populations were recalculated with these countries’ (those lacking household groundwater-use statistics) groundwater-use rates set to the extreme values of 0 and 100%. Because this applied to relatively few countries and arsenic-affected areas, doing so affected the overall global population figures by an inconsequential amount (±0.1%), indicating that using the AQUASTAT groundwater-use rates, where necessary, is an acceptable approximation.

This estimate of risk takes into account only the proportion of households utilizing unprocessed groundwater and assumes uniform rates throughout the urban and nonurban areas of each country. The uncertainties of these rates are unknown. The population in each cell was reduced by the uncertainty of the cell’s prediction, which is justified based on the heterogeneity inherent in the accumulation of arsenic in an aquifer, which is generally at a much finer scale than that of the 1-km2 resolution of the arsenic hazard map. Because the arsenic prediction for a cell represents the average outcome for that cell, we can take the modeled probability as a first-order approximation of the proportion of an aquifer in that cell containing high arsenic concentrations. Only cells exceeding the probability threshold (i.e., 0.57 or 0.72) were considered. The global estimate of 94 million to 220 million people potentially affected by consuming arsenic-contaminated groundwater is broken down by continent and country in tables S4 and S5, respectively, and represents the most accurate and consistent global estimate available. 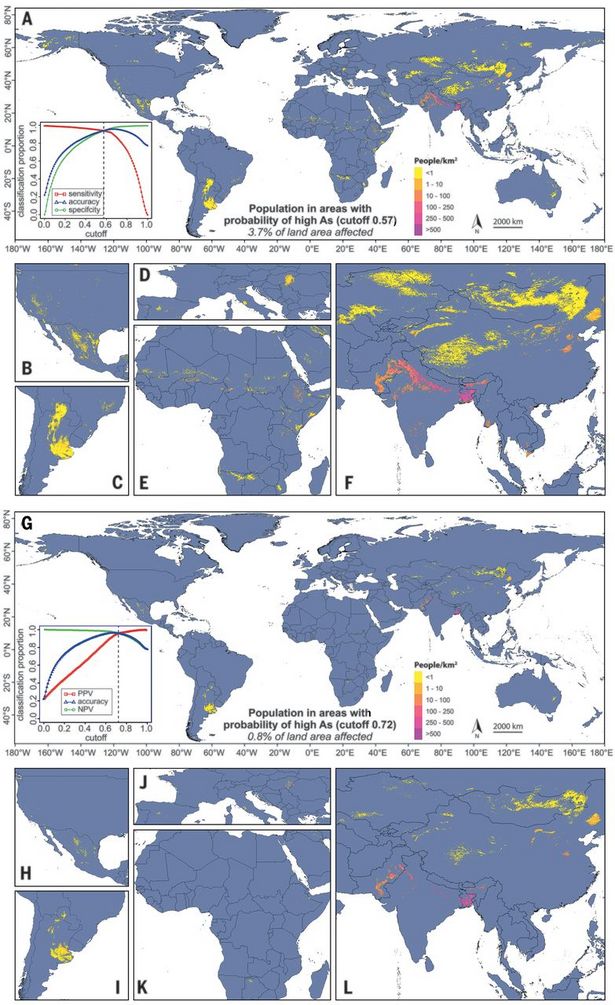 Fig. 4 Estimated population at risk. (A to L) Population in risk areas potentially containing aquifers with arsenic concentrations >10 μg/liter using probability cutoffs of 0.57 (A), at which sensitivity and specificity are equal [inset in (A)] as applied to the full (training and test) dataset, and 0.72 (G), at which PPV and NPV are equal [inset in (G)] using the full dataset. The detailed areas of Fig. 2 are also repeated here for both models (B) to (F) and (H) to (L) (Terms of use: Cite original source from Podgorski, J.; Berg, M. (2020) Global threat of arsenic in groundwater, Science, 368, 845-850 ).

NOTE: Article from the Global threat of arsenic in groundwater

What is natural or geogenic contamination of groundwater?

Visit our latest scientific article published this year in Science