Risk assessment is the scientific evaluation of known or potential adverse health effects resulting from human exposure to environmental hazards. One of the more commonly used risk assessment paradigms, the Quantitative Health Risk Analysis (QHRA), is based on the U.S. National Academy of Science in Risk Assessment in the Federal Government: Managing the Process (NAS, 1983), colloquially known as the “Red Book”. In the Red Book, the four steps are:

Hazard identification: The identification of known or potential health hazards associated with a particular agent. For the QHRA, it is important to identify health effects that are characteristic for the contaminant under consideration. For arsenic, skin lesions and cancers are typical health effects (e.g. Lokuge et al., 2004). For fluoride dental and skeletal fluorosis, there are clearly visible health effects (Serap and Buchanan, 2005; Fewtrell et al., 2006). It should also be noted that though some health effects may not be considered in a QHRA, it does not mean that they are insignificant. For example, there is growing evidence that excess in the intake of both fluoride and arsenic is linked to impaired cognitive development (e.g. Wang et al, 2007; Seraj et al., 2012; Choi et al., 2012).

Dose-response assessment: In this step, the relationship between the dose of the contaminant and the risk of a subsequent health effect is characterised. For arsenic and fluoride, dose-response assessments are based on the relationships between the contaminant concentration in drinking water (and food) and the incidence of a particular health effect. This step requires measured data. Health effects need to be identified and characterised by health experts and related to the exposure. An example is given in Figure 3.2. Fewtrell et al. (2006) examined the dose-response relationships from 12 publications on dental fluorosis and 4 publications on skeletal fluorosis. They concluded that more data would be required and that it would be important to include nutritional status and fluoride sources in addition to drinking water. 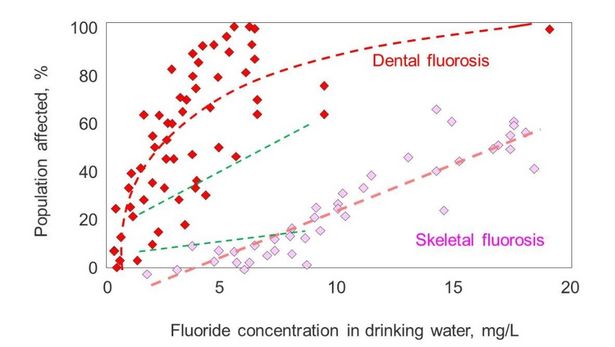 Also shown in Figure 3.2 are the results of a study in Jilin province in China (Bo et al., 2003). The dose-response curves are encouragingly similar. Nevertheless, the nature of the relationship between dose and response remains contentious, and there are calls for more biologically-based risk assessments (Carlson-Lynch et al., 1994; Kitchin and Conolly, 2010). Great efforts have been made to evaluate the dose-response of arsenic-related diseases. Fewtrell et al. (2005) estimated the risk of developing skin lesions caused by elevated arsenic concentrations in drinking water using data from Bangladesh, Inner Mongolia (China) and West Bengal (India). The evaluation showed that at a drinking-water arsenic concentration of >350 mg/L, the age-adjusted prevalence of skin lesions is around 33%. The evaluation of cancer rates and mortality linked to arsenic exposure has also been the subject of many studies (for example Fig. 3.3) and evaluations (e.g. NRC 1999, 2001, 2014). Dose-response functions have been developed to predict incidence rates from arsenic exposure (usually in drinking water). The functions include available demographic parameters, such as gender and age (e.g. Yu et al., 2003). The determination of dose-response functions for both arsenic and fluoride is very much a field of development. As new data sets become available, the models will certainly be refined. One important factor is nutritional status, as malnutrition increases the likelihood of disease (NRC, 2001 and references therein). Differences in water consumption and diet, and the speciation of the contaminant in foodstuffs, have also been noted as factors that affect dose-response functions. 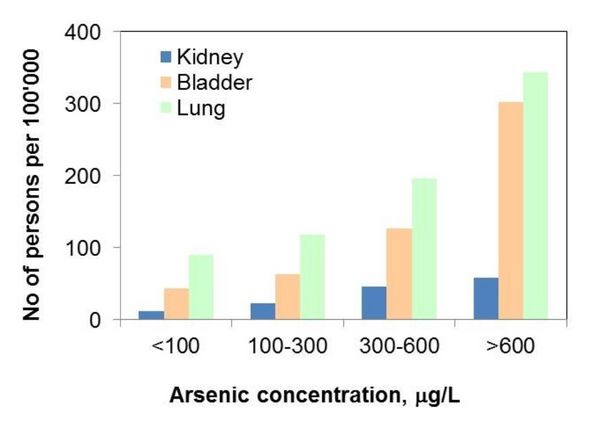 Fig 3.3 Mortality rates from different cancers as a function of the arsenic concentration in drinking water in the 50–69 age group (men and women) in an endemic area of chronic arsenicosis on the southwest coast of Taiwan from 1973 to 1986 (Chen et al., 1992).

Exposure assessment: The determination of the size and nature of the population exposed, and the route, amount and duration of the exposure. The estimated daily intake (EDI) is the sum of all possible inputs, including water and foodstuffs, per unit body weight per unit time. More details can be found, for example, in Phan et al., 2010 or Erdal and Buchanan, 2005. The EDI can be simplified to contaminant intake via water, but ideally it should be demonstrated that other pathways can be excluded. This step is important, because in cases where contaminant concentration in water is not so high, other sources become important. Section 9.4 provides a good example of fluoride intake in Ethiopia.

Risk characterisation: An integration of steps 1–3 to estimate the magnitude of the public health problem, including information uncertainties. The units are the number of people affected, often per 100,000 people. With a QHRA, it is possible to estimate the number of people that are at risk in a particular population, but how can different health effects (i.e. skin lesions, cancer) be compared? How can death and/or disability be compared? Comparisons of risks on the same scale are a valuable aid in evaluating and planning interventions to improve health. The concept of disease burden is based on the need for such a tool.

The disease burden can be quantified in terms of Disability Affected Life Years (DALYs), which quantifies the number of years affected or lost due to disease (WHO, 2014).

One DALY can be thought of as one year of healthy life lost, and the overall disease burden can be thought of as a measure of the gap between current health status and ideal health status, where the individual lives to old age free from disease and disability. Fewtrell et al. (2005, 2006) assume a life expectancy of 80 years. The health burden (expressed in DALYs) is the sum of mortality (years of life lost, YLL, and years of life with disability, YLD). Disability levels are weighted (see Table 3.4). The weighting correlates to the degree of disability (WHO, 2014). DALY = YLL + YLD where YLL = N x L N: Number of deaths L: Standard life expectancy at age of death in years and YLD = P x DW P: Number of prevalent cases DW: Disability weighting. 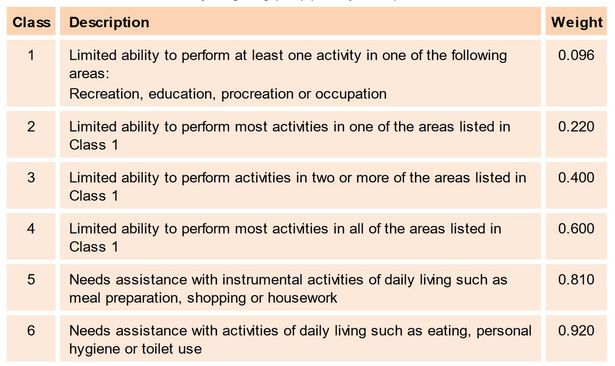 The weighting corresponds to the loss in quality of life. Fewtrell et al. (2006) give dental fluorosis a low weight of 0.0033 that remains constant with age. They base the weight for skeletal fluorosis on that of untreated rheumatoid arthritis with a weight of 0.24 for the age range 40–59 and of 0.5 for those aged 60 or above. A weighting of 0.1–0.2 is given for arsenic-related skin lesions, depending on the length of exposure (Fewtrell et al., 2005). The DALY can be used to compare different scenarios. For example, DALY estimates have been used to compare the health burden associated with water consumption from different arsenicosis mitigation options in Bangladesh considering both the potential decrease of arsenic intake and to the potential increase in microbial contamination (Howard et al., 2006, 2007), Due to the complexity of the calculations, no examples are given in this handbook. Seriously interested readers should consult the literature and guidelines and tools provided by the WHO on the estimation of the national burden of disease (WHO, 2001, 2014).