What are the effects of arsenic on human health?

Arsenic causes a wide range of adverse health effects. The acute toxicity of As(III) is somewhat greater than that of As(V), but because As(V) is reduced to As(III) in the body, the two species can be considered equally toxic. 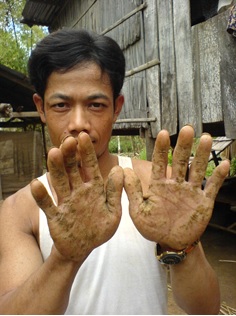 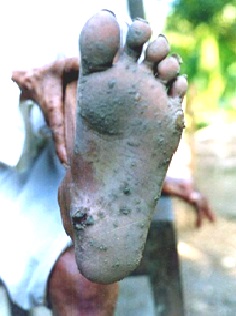 The main health concerns, however, are cancers of the skin or internal organs. In particular, arsenic-related lung and bladder cancers can cause heavy mortality (Argos et al., 2010; Sohel et al., 2009). More recently, arsenic exposure has been linked to cardiac effects such as myocardial infarction (heart attacks) (Yuan et al., 2007). Cardiac risks are elevated within short exposure periods, while cancers can take decades to develop, even long after arsenic exposure has stopped (Fig. 2.4). In addition, arsenic is linked with a range of impacts on children, including reduced birth weight, infant mortality and impaired cognitive development (Smith and Steinmaus, 2009). 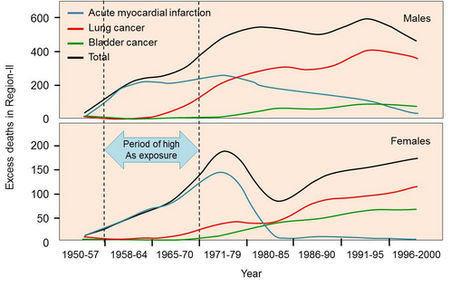 The main health concerns, however, are cancers of the skin or internal organs. In particular, arsenic-related lung and bladder cancers can cause heavy mortality (Argos et al., 2010; Sohel et al., 2009). More recently, arsenic exposure has been linked to cardiac effects such as myocardial infarction (heart attacks) (Yuan et al., 2007). Cardiac risks are elevated within short exposure periods, while cancers can take decades to develop, even long after arsenic exposure has stopped (Fig. 2.4). In addition, arsenic is linked with a range of impacts on children, including reduced birth weight, infant mortality and impaired cognitive development (Smith and Steinmaus, 2009).

Because of the ongoing uncertainty about low-level effects and the difficulties involved in measuring arsenic concentrations below 10 µg/L or in reducing arsenic concentrations to this level, the WHO has set 10 µg/L as a provisional guideline value (WHO, 2011). Many countries have a less strict drinking-water standard of 50 µg/L. The disease burden at these levels can be considerable; Argos et al. (2010) found all-cause mortality levels to be 34% higher in a population exposed to 0.01–50 µg/L arsenic, compared to a control group with <10 µg/L exposure. Those exposed to 150 µg/L or more showed 68% higher all-cause mortality. There is no effective medical treatment for chronic arsenicosis, except for switching to an arsenic-free drinking-water source. However, palliative care such as application of ointments to cracked skin lesions can ease suffering. Chelation therapy is effective for short-term, acute poisoning, but not for long-term exposure.

Overview of arsenic in soils, plants and foodstuffs

Arsenic is ubiquitous in the environment. Whilst uncontaminated soils typically contain less than 10 mg As/kg, concentrations of up to 80 mg As/kg have been reported from areas irrigated with arsenic-contaminated groundwater (Hossain, 2006). The mobility of arsenic in soils and its availability for plant uptake depend strongly on soil redox conditions. In aerated soils, arsenic is present mainly as arsenate (As(V)), which binds strongly to iron oxides. Arsenic concentrations in soil porewater solutions are therefore generally low. By contrast, much higher concentrations of dissolved arsenic are found in flooded soils, where reducing conditions prevail and arsenite (As(III) is the dominating species. This is related to As(III) binding more weakly to the solid phase, and to iron oxides, its main host phase, being dissolved under reducing conditions. Plants growing in oxic environments, such as most cereal crops and vegetables, are therefore exposed to relatively low concentrations of As(V) in the soil porewater solution. Plants growing in flooded soils, most importantly rice, are by contrast exposed to higher concentrations of dissolved As(III) (Zhao et al., 2010). Arsenic is a non-essential and toxic element which plants take up via the channels for essential nutrients. Because of its chemical similarity to phosphate, As(V) is taken up via phosphate transporters. As(III) has recently been shown to share the silicate uptake system in rice plants (Zhao et al., 2009). Since arsenic uptake occurs via the root system, plant roots often accumulate more arsenic than shoots, leaves and fruit. In rice plants, the arsenic content decreases in the order roots > stems and leaves > grain, with arsenic content being generally ~10 times lower in grains than in shoots and leaves (Heikens et al., 2007). Irrigation with arsenic-contaminated groundwater has been shown to lead to increased arsenic levels in rice and vegetables (Williams et al., 2006; Ahsan and del Valls, 2011; Table 3.1). Whilst arsenic speciation in terrestrial plants is dominated by inorganic arsenic, fish and other seafood contain mainly arsenobetaine, an organic arsenic species considered to be of no toxicological concern (Zhao et al., 2010). The overall contribution of seafood to inorganic arsenic exposure is therefore very limited (Table 3.1). The inorganic forms of arsenic are orders of magnitude more toxic than organic species (NRC, 1999, 2001). 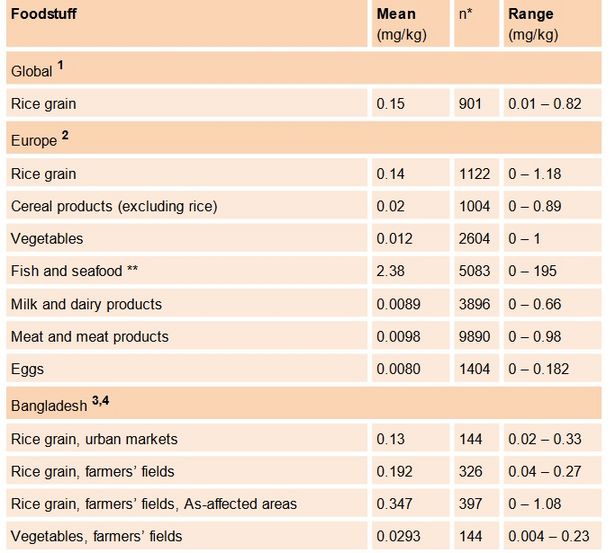 Human exposure to arsenic via food

Owing to its traditional cultivation in flooded fields, rice contains significantly higher amounts of arsenic than other cereals (Table 3.1). Rice is the staple food of half the world’s population. This includes those living in the large river deltas most affected by the geogenic arsenic contamination of South Asia. In rural Bangladesh, for example, adults consume around 0.5 kg dry weight of rice per day, which accounts for ~70% of their calorific intake ((Khan et al., 2009; FAO/WFP, 2008). Assuming a total As content of 0.13 mg As/kg dry weight in the rice, corresponding to the average As content in rice from urban Bangladeshi markets (Table 3.1), the daily consumption of 0.5 kg dry weight of rice leads to the ingestion of 65 μg As per day. The arsenic intake via the consumption of fresh vegetables, 130 g fresh weight for a typical rural Bangladeshi diet, is less than 5 μg As per day (Williams et al. 2006; Table 3.1). If we assume a body weight of 60 kg, the calculated daily ingestion of arsenic via rice translates to a daily intake of 1.08 μg As per kg body weight. This corresponds to around 50% of the provisional tolerable daily intake (PTDI) for inorganic arsenic recommended by the joint WHO/FAO Food commission (WHO, 1989). In As-affected areas in Bangladesh, where the arsenic content in rice can be up to 0.3 mg As/kg, the daily arsenic ingestion via rice can increase to over 100% of PTDI. As ~80% of arsenic in rice from Bangladesh is inorganic, the contribution of rice consumption to the PTDI in the two examples above is critical (Meharg et al., 2009). The above estimates illustrate two points: a) among food items, rice contributes most strongly to inorganic arsenic exposure in Bangladesh and b) the amount of inorganic arsenic ingested via rice consumption is of the same order of magnitude as the provisional tolerable daily intake (PTDI) of 2.1 mg As/kg body weight recommended by the joint food commission of WHO/FAO in 1989. The recommended limit was recently withdrawn because of new epidemiological data, but a revised, stricter tolerable daily intake value for arsenic has yet to be established (WHO, 2011). This strongly suggests that exposure to arsenic via rice consumption is likely to lead to negative health impacts in the Bangladeshi population. However, as illustrated in the following, exposure via rice consumption is of secondary importance compared to exposure to arsenic via geogenically contaminated drinking water.

Comparison of exposure to arsenic via food and drinking water

The drinking-water limit for arsenic in Bangladesh is 50 μg/L. An adult weighing 60 kg and consuming 3 L of drinking water complying with this limit ingests 2.5 μg As/kg body weight. This alone corresponds to around 120% of the PDTI (Watanabe et al., 2004). In many rural areas of Bangladesh, however, people continue to rely on water with arsenic concentrations well above the national limit. Arsenic exposure via drinking water can thus easily be 2–6 times higher than the exposure calculated here. Wherever people do not have access to drinking water complying with the Bangladeshi guideline value, exposure to inorganic arsenic via drinking water therefore clearly exceeds exposure via food. The most urgent and effective mitigation measure in geogenically contaminated areas is therefore the provision of safe drinking water.

Mitigating exposure to arsenic in food

Various measures can be taken to reduce the arsenic content of food crops, including breeding low-arsenic cultivars, diversifying agriculture towards crops requiring less irrigation input and modifying the growing conditions of water-intensive crops. In particular, growing rice in fields flooded only intermittently or in raised beds with furrow irrigation represents a promising strategy for reducing the arsenic content of rice grain and straw (Duxbury and Panuallah, 2007; Roberts et al., 2011). Since straw is used as cattle feed in Bangladesh and West Bengal, avoiding high arsenic concentrations in rice straw represents an important additional measure limiting the introduction of arsenic into the food chain (Ahsan and del Vals, 2011). A more comprehensive review of mitigation options in crop production can be found in Brammer (2009) and Zhao et al. (2010).

In terms of food processing/preparation, two simple measures can be taken to reduce As ingestion via rice: a) rice milling and b) boiling rice in excess As-free water and discarding the water after cooking. Both rice milling and cooking rice with excess water are common practices in Bangladesh and West Bengal. Rice milling removes the outer bran layer of the grain where arsenic concentration is particularly high. A drawback of rice milling is that it also leads to the removal of beneficial trace nutrients such as zinc (Zhao et al., 2010) and vitamin B1 (thiamine) (WHO, 1999). Boiling rice in water with low As concentrations lowers grain As content. By contrast, cooking rice with As-contaminated water leads to an increase in grain arsenic and should therefore be avoided (Mondal et al., 2010). Using excess arsenic-free pond water for cooking therefore represents an option for reducing arsenic ingestion via rice consumption. Since there is no effective medical treatment of arsenicosis, avoiding arsenic intake represents the only way to improve the health status of affected populations. Nevertheless, there is evidence that symptoms of arsenicosis are less pronounced in people with varied diets rich in proteins and vitamins (Milton et al., 2004; Mitra et al., 2004). Selenium deficiency, which is common in Bangladesh, on the other hand, appears to exacerbate arsenicosis (Zwolak and Zaporowska, 2012). Diversifying people’s diet to include more vegetables and proteins or the provision of selenium supplements (Sah and Smits, 2012) may thus also contribute to reducing the incidence of As-related symptoms.

Visit our latest scientific article published this year in Science